Northlake was founded in 1961, when Lola Reynolds, Betty Jirucha, and Ellen Hanly, members of East Shore UU in Bellevue began thinking and talking to each other about having a church closer to where they lived – a liberal fellowship to serve Kirkland and the northern shore of Lake Washington.

Twelve couples met and drafted the first bylaws. Northlake’s first home was rented space at the Cadle Theatre at Lake Washington HS. The first service was on April 21, 1961. The official charter for Northlake Unitarian Fellowship was issued by the Unitarian Universalist Association on May 15, 1961 – the very first charter issued after the merger of the Unitarians and Universalists.

Northlake purchased their first building – a former mortuary – on First Street in downtown Kirkland in November 1962. (We also acquired a parcel of land in Juanita.) The church community included 27 adults, and 43 children.

In 1965, we hired our first minister, Rev. Ralph Mero, part time. Under his leadership, Northlake took on social justice causes such as remodeling houses for minority families. In 1971, with massive layoffs at Boeing, and other cultural events, Northlake faced financial challenges, and Rev. Mero resigned.

The congregation became lay-led and more active within the local and national UU organizations.
In 1974, we sold the Juanita property and we did a major remodeling of the building. We paid off the mortgage in 1976.

In the late 70’s, Rev. Patrick Thomas Aquinas O’Neill gave a memorable sermon as a guest speaker. The congregation loved it, and hired Patrick to return for guest speaking, then in the fall of 1979, Patrick was hired as our second minister, on a part-time basis. His ministry energized the community and added more spirituality and more music. His preaching “packed the house.” Membership grew from 80 to 120 in one year. He encouraged work for social justice, and we housed a Vietnamese refugee family in the church’s rental house. Religious Education once again became important, and we hired our first paid RE director.

Rev. O’Neill resigned in 1985, and we hired Rev. Mary Scriver as an interim minister. In 1986, we called Rev. Michael Hennon, who was not a good fit and resigned a year later. After a lay-led period, we called Rev. Barbara Morgan in 1989. Membership increased from the low 80’s to 130, the church school was full, and two services were held weekly. During Rev. Morgan’s tenure, we changed our name to Northlake Unitarian Universalist Church.

In 1993-4, the church sold its First Street property to the city and bought our current building on State Street. Rev. Morgan resigned in 1997, as the church could no longer pay her a full salary due to the expenses of the new building.

We became lay-led again, and Rev. Roger Smith was hired as a quarter-time minister. We created a task force to move us towards strengthening the liberal religious presence in the city. This group’s work was resulted in the establishment of clear values and goals, with priorities and a timeline to achieve them. Rev. Amanda Aikman was contracted quarter-time for the next four years.

In 2005, we acquired the chapel. This pre-war building had been the original Lutheran church building on the site of our current building. In 1964, they sold it and moved it to the funeral home property across the street. In 1996, that property was sold to a developer. In 2005, they offered the chapel to Northlake. The building was free, but we would have to pay to move it to our site and construct a new foundation. It would have been cost prohibitive to bring the building to current codes, but it was deemed eligible for historic landmark status which made the project viable. Many of our current members have stories about this project. There were thousands of volunteer hours devoted to it, and the church community was strengthened in the process. We rent the building to several tenant organizations, and we use it for our RE program on Sundays.

The congregation called Rev. Marian Stewart in 2008 to serve as a full-time minister. During her tenure, membership increased from 92 to 161 and children in RE grew from 25 to 60. A strong RE program was maintained, including an extension to Lifespan RE with the hiring of our current RE director, Margaret Rogers.

Rev. Stewart was a leader in strengthening interfaith alliances in the area. Following services commemorating the 10th anniversary of the attacks on September 11, 2001, the F.I.R.E. (Fostering Interfaith Alliance in the Eastside) organization was created. The social justice issue that galvanized NUUC the most during this time, was the legalization of same-sex marriage. Our congregation worked on the state legislative process to guarantee equal rights for gay and lesbian people. Rev. Stewart left Northlake to lead a larger congregation in 2017.

Rev. Jim VanderWeele was hired as an interim minister in the summer of 2017 and served till summer of 2019. He was an invaluable guide as we looked for our new settled minister. He guided the congregation in a reflective journey of creating our congregational covenant which defines our common values and priorities.

In August of 2019, we were joined by Reverend Nancy Reid-McKee.

This article is a combination of How Northlake Began by Ellen Hanly, and additions by Kim Convertino, Laurence Fennema and others. 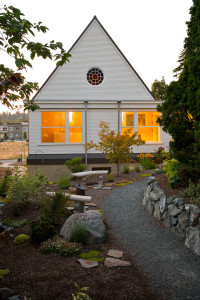